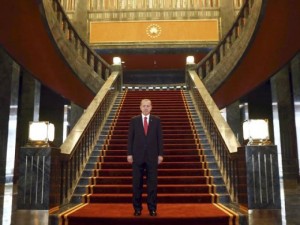 Turkey has lately moved to the epicenter of world politics, and rightly so. The jury is still out on whether that is a good or a bad thing and that is because of its handlings with regard to the Islamic State (IS) crisis in Iraq and Syria. Indeed, Turkey’s indecisiveness and belated actions in the face of the potential fall of the Syrian Kurdish town of Kobane and the advancements of IS more generally, bring to mind the Turkish foreign policy of the past.

Through the delay to take action or the refusal to allow Western allies to use its military bases, Turkey demonstrated a well-known reluctance to engage regional security problems, a suspicion toward Western powers, and a pro-status quo tendency. These were the very features that characterized the foreign policy of Turkish Republic for the most part of its history; a doctrine very much influenced by the founder of Turkey, Kemal Ataturk, and the military-bureaucratic establishment. Similarly, Turkey’s opportunism, namely, its wish to be on the right side of history without being willing to play its part, draws parallels between today and 1945 when Turkey joined the Allies of World War II only a couple of months before the end of the war and after its outcome had already been decided. END_OF_DOCUMENT_TOKEN_TO_BE_REPLACED

The humanitarian crisis caused by the Islamic State (IS) continues to terrorize and displace hundreds of thousands of people in the Middle East. The autonomous canton of Kobani is now bearing the brunt of the IS’s attacks as the international community has mostly been watching. The city has been under siege for three weeks. Despite fierce resistance by the defenders of the town, the advance of the IS forces towards Kobani is threatening to set off another massacre similar to that of Shengal. As scholars working on issues related to the Kurds and other peoples of Kurdistan, we are profoundly concerned about yet another imminent humanitarian crisis and stand in solidarity with the people of Kobani. We urgently call on the coalition forces against the IS and the broader international community to take immediate action to prevent an impending disaster by supporting the Kurds in their fight for self-defense. END_OF_DOCUMENT_TOKEN_TO_BE_REPLACED

One could be led to believe that it all started in 2013 with the election of Hassan Rouhani to the presidency of Iran. Rouhani, along with his moderate and reformist agenda, bore much optimism among Western countries that Iran might shift direction towards a more pragmatic and less anti-Western foreign policy. But this was not what put Iran to the epicenter of the Middle East and international politics.

Iran’s increasing influence and rising role in the broader region has been prompted by three main developments: a) the Iraq war of 2003; b) the withdrawal of the American troops from Iraq by 2011; c) and the failure of Western policies in the case of Syria’s civil war in conjunction with the rise of the Islamic State of Iraq and al-Sham (henceforth, ISIS). Rouhani and the new round of negations about Iran’s nuclear program are only “the cherry on the pie.” END_OF_DOCUMENT_TOKEN_TO_BE_REPLACED

It is commonplace these days to refer to the Islamic State of Iraq and al-Shām (i.e. Greater Syria) – henceforth, ISIS – as the greatest threat to regional, international, and for some countries, even national security. As a product of mergers between smaller Islamist groups (e.g. an al-Qaeda affiliated Iraqi group) in the aftermath of the 2003 US-led Iraq invasion, this rapidly evolving organization has been empowered in the context of the Syrian civil war, and has surprised the world when it swept into northern and central Iraq early June 2014. It has changed its name into Islamic State (IS) and declared the establishment of an Islamic Caliphate – a state run according to Sharia law – in Syrian and Iraqi territories.

One of the biggest questions that needs to be answered is, how do we counter ISIS? Almost three months after ISIS advanced into Iraq, US President Barak Obama stated, “We don’t have a strategy.” This was quite a surprising statement coming from the White House given the high level of threat that ISIS poses; but it is, nonetheless, true. However, it was later decided for Obama to announce his plan against ISIS in an address to the nation on September 10th. Among other things, Obama is expected to introduce ways of enhancing international cooperation against ISIS and try to display a more coherent and decisive stance than the one presented thus far. END_OF_DOCUMENT_TOKEN_TO_BE_REPLACED

On June 10, 2014, the Islamic State of Iraq and al-Sham (i.e. Greater Syria) – henceforth, ISIS – surprised the world by advancing into several territories of central and northern Iraq. Most notably, ISIS has taken over Iraq’s second biggest city, Mosul, and the also important cities of Fallujah and Tikrit (the birthplace of former Iraqi leader, Saddam Hussein). ISIS has also tried to gain control of the oil-rich area of Kirkuk (which is now under the control of Iraqi Kurdish forces). Furthermore, it is said that the vitally important oil refinery in Baiji has been almost completely taken over by ISIS in an offensive against the Iraqi army.

Most importantly, ISIS has declared itself to be an Islamist “Caliphate” (i.e. Islamic state) and has unilaterallydeclared statehood in Syrian and Iraqi territories under its control. The group has recently renamed itself as the “Islamic State” and declared the group’s leader, Abu Bakr Al Baghdadi, as the new caliph of the Islamic State and the leader of Muslims everywhere.

ISIS’offensive has left the Iraqi state in a dire situation, ridden by sectarian and ethnic conflict. The conflict has created a large number of refugees, and has threatened Iraq’s capital, Baghdad. The following addresses the roots and ideological features of the conflict, in addition to the geopolitical implications of the Iraqi crisis for regional relations and U.S. foreign policy. Emphasis is placed upon analyzing the most important developments and their implications rather than on facts, as the situation on the ground is highly fluid. END_OF_DOCUMENT_TOKEN_TO_BE_REPLACED

Zenonas Tziarras
Create a free website or blog at WordPress.com.