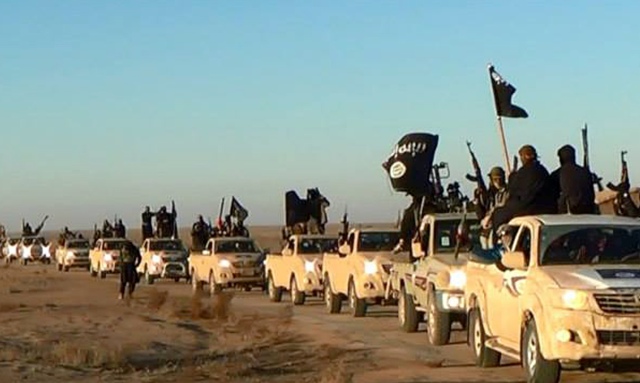 Generally speaking, the emergence of ISIS has posed a significant security threat to regional and international states alike; a threat which challenges the stability and territorial integrity of regional states as well as Western regional interests. As known from International Relations and particularly Realism literature, (mutual) security threats are one of the most important factors in the formation of different kinds of alliances. As such, it is without surprise that we see unlike partnerships to emerge, such as the ones mentioned below. END_OF_DOCUMENT_TOKEN_TO_BE_REPLACED

“This is not a revolution. They are terrorists who live in America, France, in Istanbul.” – Syrian civilian[1]

“Battle for Syria: View from the Frontline” is a mini documentary filmed by the Russian POCCИЯ 24 TV channel. What is particularly interesting about this documentary is that it was filmed in the battle fields of Syria, following the forces of the Syrian (regime) army around. Thus, the whole project offers an entirely different perspective on the Syrian conflict from the one the western media present – both in terms of the actual conflict and the not so projected view of the regime. Throughout the documentary one can realize that certain features stand out as they are being emphasized: 1) the military tactics of the Free Syrian Army (i.e. rebels); the struggle of the Syrian Army (i.e. regime) as a counter-terrorism campaign; and the composition of the Free Syrian Army (FSA).

END_OF_DOCUMENT_TOKEN_TO_BE_REPLACED

In terms of the Syrian crisis it is already clear that certain issues will keep playing a decisive role in the upcoming developments, or that they could constitute outcomes of the conflict. These issues could be divided into internal and external.

As far as the external issues are concerned, it has become obvious that the al-Assad regime has by its side the undisputable powers of Russia and China. It is noteworthy that these two countries have recently announced that they will not be accepting any western intervention in Syria, thus responding to Obama who said that the use of chemical weapons by the regime would be a “red line” for the US and a reason for the use of military force. In this light, opponents of the Syrian regime remain the western states with leading country the US, while Turkey plays a central regional role against the Assad regime – both as a meeting centre of regional and international actors for the management of the crisis and the organization of the Syrian opposition/resistance, as well as a refugee hosting centre and a (indirect) supporter of the Syrian rebels. Important role in supporting the rebels are also playing Arab countries such as Qatar, Saudi Arabia, and Jordan, while it has been reported that N. Iraq trains and reinforces Syrian Kurds for the armed resistance within Syria. Moreover, Turkey and the US have been discussing along with other western allies the establishment of a partial no-fly zone over Syria for the protection of non-combatants. In the context of the external dynamics of the Syrian crisis, it important to mention Iran which is one of the very few allies of the Syrian regime and one of the reasons why the US (and Israel, among others) want Assad replaced.

END_OF_DOCUMENT_TOKEN_TO_BE_REPLACED

It has been reported that a Turkish fighter jet was shot down on Friday, June 23, 2012, by Syrian forces. The Syrian military forces had later confirmed the reports. Leaving aside the technical details about how the crash occurred, and who is to blame, this incident could significantly escalate the existing crisis between the two countries on the one hand, and offer the perfect alibi, as well as credibility, to Turkey and its western allies – namely, NATO – to actively and militarily intervene in Syria, on the other.
Importantly enough, the Turkish President, Abdullah Gul, said that Turkey will do “whatever necessary”. But what does “whatever necessary” means? In answering this question, one must take into account earlier reports saying that CIA officers have been helping Syrian rebels through Southern Turkey. Even though the Turkish government rejected this information, it raises concerns about the role of Turkey and other external actors in the Syrian conflict, as well as the near-future intentions of westerns powers. Furthermore, let us not forget that the Turkish Prime Minister, Tayyip Erdogan, in April, 2012, threatened to invoke NATO’s self-defense article 5.

END_OF_DOCUMENT_TOKEN_TO_BE_REPLACED

Over the last few weeks we’ve been bombarded with “Responsibility to Protect” rhetoric; we’ve been reminded of the (U.S.) need to intervene in Syria to weaken Iran, as well as Hezbollah and Hamas; we’ve been told of all the positive effects a new Syrian regime would have for the region; we’ve been pointed out how useful regional countries (e.g. Turkey) would be in a potential intervention; how Russia would care, but not so much as to cause problems, and so on. It is as if everyone stopped thinking rationally and stopped weighing the costs and benefits. To be honest though, depending on one’s perspective of the situation, the costs and benefits could be entirely different. What would be the objective of an intervention, really? Would it be Iran? Would it be Hamas and Hezbollah? Would it be the Russian interests in the Middle East? Would it be the protection of the Syrian people under the “Responsibility to Protect” umbrella? Or is the “Responsibility to Protect” just the moral cover-up – and the ultimate immoral means – for the achievement of all previous, and more, objectives? I would vote for the latter. In any case, an intervention – if it were to take place – should be about the people. But the fact is that there is no scenario in which the Syrian people – or the region, for that matter – would benefit from an intervention. There are at least five main reasons for that, briefly presented below, which are linked to the simplifications put forward by the intervention advocates.