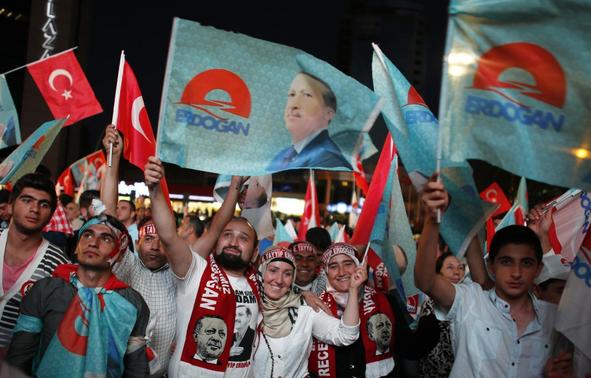 Although İhsanoğlu has the potential of challenging Erdogan, it is believed that the latter will be the one to be elected to the presidential office from the first round of the election. Apart from the multiple successful economic and other domestic policies of the AKP, Erdogan’s dynamic is also a product of his tendency to capitalize on the high levels of conservatism among the Turkish society, not least because he and his party come from an Islamist conservative tradition and ideological background. In this way, Erdogan and the AKP have led the society to further conservatization while at the same time their majoritarian policies have polarized it by alienating more secular and democratic groups and political powers.

The result is the consolidation and strengthening of AKP’s leadership and Erdogan more specifically. The largely awaited victory of Erdogan is going to keep up and intensify the trajectory that has been followed thus far. Erdogan will pursuit the increase of presidential powers through constitutional changes thereby intensifying his authoritarianism and dividing the society even more. The social resistance focal points that have emerged especially after the mass demonstrations of the Gezi Park more than a year ago, are expected to remain in place and possibly increase as a reaction to the absolute power of the AKP.

On the foreign policy front, more Erdogan entails more instability, emotionality and irrationality. It entails worse relations with the United States, with the European Union, with Egypt, Syria, and other countries of the region. It also means more anti-Semitism and worse relations with Israel, especially given the latest Gaza events, and continuation of sectarian policies in the region on the basis of the Sunni (Islamic) axis. Moreover, it is expected to sustain the efforts for the assimilation and co-option of all social, political and institutional structures of the Cypriot occupied territories by Turkey’s political core. Its stance towards the Cyprus Problem is not expected to change for the better; however this does not exclude the possibility for a settlement given that such a development would depend on the concessions, policies and general stance of the Republic of Cyprus and the Turkish-Cypriot leadership as well. Turkey’s policy will remain fixed on pursuing a settlement on the basis of a veiled – or not – confederation model.

Overall, Turkey is at a transitional stage which based on the current realities, prognosticates more instability and uncertainty for the country itself. This will have an impact on its economy, its social structures and cohesion as well as on its foreign policy effectiveness and international image. Lastly, all other things being equal, it will have negative repercussions for the regional security since Turkey is gradually turning into a pole of instability and tension.

This article was first published by Athens Views – see below.